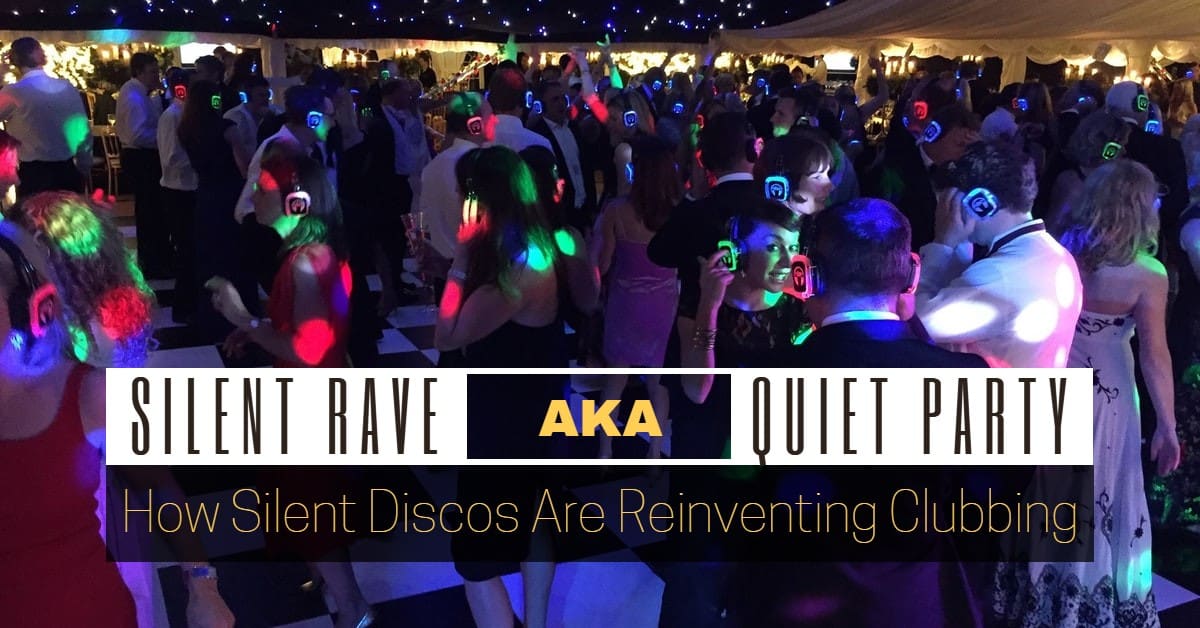 Clubbing has gone through several changes in its long history as a pastime. The music changed, the scene changed, and the fashion changed, but few trends really changed how clubbing actually worked.

Since the rise of silent discos, however, everything we once knew about clubbing has been flipped upside-down on its head. Let’s take a look at what’s changing, how the change came about, how it’s evolved since then, and why it’s become the craze it is.

A Quiet Entry Onto the Clubbing Scene

Where did silent discos come from?

Unlike many trends, the origin story of the quiet party is much easier to pinpoint. In the early 1990s, we saw the first experimental use of headphones and portable radios through a shared experience with eco-activists looking for a way to party without disturbing wildlife and Glastonbury goers using it to keep the festival going after the noise curfew.

But it really hit its stride in the early-2000s, sporadically appearing in cultural museum events and music festivals until it spread further and further through the US. From there, it quickly caught on in the UK, initially through student-culture clubbing, but has grown to become one of the most popular events on offer in the clubs that accommodate it.

As with all new technology, silent discos started off relatively simple. Once upon a time, you only had the choice of one channel. The headphones were either connected to a portable radio that you had to carry individually or were using a very short-range connection to catch the radio waves directly.

Nowadays, however, not only has sound quality increased. The range of silent disco headphones can reach up to as high as 500 meters away from the signal, making them wearable in just about any venue imaginable.

Nowadays, you get a lot more control over your own silent disco experience, with headphones offering multiple channels allowing you to choose your groove, not to mention your volume. You can listen to what you like, as quietly or as loudly as possible.

The average experience at a silent disco in a club, at a birthday party, a cinema, a wedding, or any other event is drastically different to the usual crowded atmosphere of a conventional clubbing experience.

In conventional clubs, if you’re not directly on the dance floor, with no obstacles or interruptions between you and the speakers, you weren’t hearing the music as fully. This means that people crowd close to the speakers which often means less space to dance and a much more cluttered, uncomfortable experience.

With silent discos, your party extends as far as the signal’s reach. No more getting up in anyone’s face just to enjoy a song.

Why It Caught On

It’s the control put in the hands of the club-goer that makes the silent disco a much better experience. Some headphones offer 3 channels, others offer 9, meaning you can have a wide diversity of musical experiences at any one party, and switch between them as you like.

No longer do you have to leave the dance floor if things are getting too loud, just switch the volume. The extra space means more room to dance, meaning more fun.

You might think that everyone wearing their own headphones and listening to their own choice of channel would take away some of the social aspect but the opposite has proven true.

When you want to strike up a conversation with someone once you realise you’re dancing to the same tune, it’s as simple as slipping the headphones off. No need to vacate the dance floor, you can enjoy a conversation right there without having to shout and scream at one another.

What the Future Holds

Without a Nostradamus on hand, it’s hard to tell what the future of silent disco is, but it can be confidently said that the future’s looking bright.

Teams like the Silent Disco Company are setting up all over, bringing the new experience not only to clubs but anyone who wants to hire their own quiet party kit.

The greater sense of control, the environmentally friendly nature of it, and the greater comfort and enjoyability of it has kept the craze growing strong for nearly a decade now.
As the technology improves, it’s only going to get better, too.