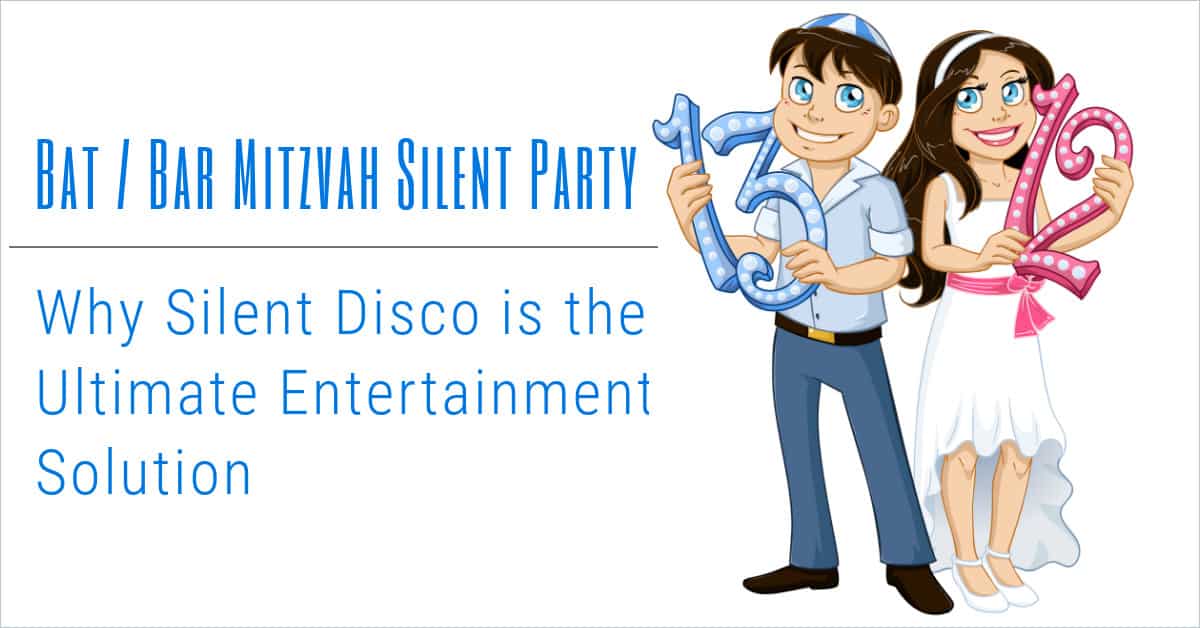 Bat and bar mitzvahs are incredibly significant occasions for those of the Jewish faith. To find out more about this unique celebration and just how compatible such events can be with a silent disco, read on…

What is a Bar Mitzvah?

The term “bar mitzvah” is frequently misused. You have likely heard discussion of a child having a “bar mitzvah”, in the same way they might have a birthday party.

The term actually denotes a status rather than an event. A boy of Jewish heritage becomes bat mitzvah when he turns 13. This event is usually honoured with a religious ceremony and a subsequent party, but even without these, all Jewish boys become bar mitzvah when they reach the age of 13.

So what does it mean to be a bar mitzvah? Simple: at the age of 13, a Jewish boy is considered to be a fully-fledged member of the Jewish community, and is able to participate fully in all religious events. It is the point in their lives in which children must observe the commandments; the term “bar mitzvah” is often translated as “son of the commandments”.

It is often described as a “coming of age” transformation; the age at which a Jewish boy becomes a Jewish man.

What is a Bat Mitzvah?

A bat mitzvah is identical to the bar mitzvah; a moment when a Jewish child becomes an adult and must observe the commandments. However, there are two key differences between a bat mitzvah and a bar mitzvah:

● The bat mitzvah is for female children rather than boys. “Bat mitzvah” is often translated to mean “daughter of the commandments.”

● A Jewish girl becomes a bat mitzvah at the age of 12.

Confusingly, “bar mitzvah” and “bat mitzvah” are also used to refer to the ceremony that Jewish children go through after their relevant birthday – even though the person is actually the bar/bat mitzvah, not the event itself!

We’ll be continuing to use the term “bar/bat mitzvah” to indicate the event through the rest of this piece, for the sake of clarity.

What to Wear to a Mitzvah

If you are invited to a mitzvah (either bar or bat), then the general rule for your clothing is formal.

● You should wear the same kind of outfit to a mitzvah as you would to a wedding or similarly “showy” event.
● Women should wear dresses or a formal pantsuit.
● Men should wear a suit or other appropriately formal clothing.
● If you are not Jewish, you do not need to wear the tallit – a prayer shawl.
● If you are offered a yarmulke, then you should accept it. A yarmulke is not a sign of religious observance, but more a sign of respect for the synagogue itself.

How Long is a Bar / Bat Mitzvah Ceremony

In most circumstances, a bar or bat mitzvah will be held during the Shabbat morning service; the Saturday morning service that coincides with the Jewish sabbath.

The length of the Shabbat depends entirely on the particular congregation; some are short, others can last up to two and a half hours. The bar/bat mitzvah ceremony within the service is usually relatively short.

Over recent years, bar/bat mitzvah parties have become more and more common. These events are a celebration of the bar/bat mitzvah moving into adulthood and just make for a pleasant occasion for friends and family to gather for a good time!

These parties are most commonly held on the Saturday evening after the Shabbat ceremony in the morning. One thing you should probably expect at a bar/mitzvah is the horah; a traditional Jewish dance that involves linking hands with a group and dancing in a circle. The party is not religious in its nature.

For the most part, bar/bat mitzvah parties are identical to any other kind of family party. There will usually be music, dancing, food, and a wide mix of guests.

The wide mix of guests, however, can present a few logistical problems for a bar/bat mitzvah – problems that a silent disco can help to solve.

A bar/bat mitzvah is a celebration of the individual who has recently turned 12 (for girls) or 13 (for boys). As you might expect, these celebrations are family affairs; a time when a whole family is able to come together and celebrate one of their own coming of age.

As wonderful as this is, there’s also the potential downside of the fact that a large family group probably want very different things from their party.

● The youngest generation – that the bar/bat mitzvah themselves are part of – will want to have a great time, listen to music of their personal taste, and take part in plenty of dancing. They’re not particularly concerned with having conversations and their preference is, almost always, going to be for more modern, contemporary music.
● The middle generation – the generation of the parents of the bar/bat mitzvah, and their own friends – will likely prefer an event where there is room to converse with friends and family members. They’ll want to party too, but they will also want to engage with guests and enjoy the food available.
● The older generation – the grandparents of the bar/bat mitzvah and their friends – will likely prefer a more sedate occasion. When it comes to getting up to dance, they would usually prefer music that is more to their preferences rather than something the youngest generation would choose.

So, three generations… and one party. How can you make it work? With a silent disco of course!

Cater to all music choices

Three generations, all with very different ideas about what constitutes “good” music. A silent disco is the natural solution. As a silent disco uses different channels, the DJ can play chart music for the youngest generation to enjoy, 80s classics for the parents, and something more sedate and relaxed for the grandparents. It truly is the perfect solution.

With a conventional disco, talking while the music is playing is… well… pretty much impossible. You have to shout to be heard, and it’s even more difficult to understand what someone is saying to you.

With a silent disco, this problem becomes a thing of the past – as you might expect, the clue is in the word “silent”. Unless you’re wearing headphones and tuned to a channel, then the room will sound absolutely quiet, so you can proceed with conversations without having to be concerned.

This is perfect for the parents and grandparents who might want to catch up with friends and family members; they can do so without having to small the fun of the younger generation, who are still able to party on the dance floor, their headphones in place.

If there’s one thing that separates the generations at a party more than anything else, it’s the attitude to how loud music should be. The younger generation want loud, fun, and boisterous music; the older generations would prefer something a little quieter.

With a conventional celebration, this difference of opinion tends to mean that at least one generation is going to have to cope with a volume they wouldn’t choose themselves. This is, obviously, less than ideal – and thankfully, the situation is entirely avoidable by choosing a silent disco.

With silent disco headphones, the user is able to choose the volume level that suits their preferences best, so everyone is guaranteed to be happy.

Silent discos are a truly flexible choice, one that can be tailored to ensure that no one has to miss out. There’s no need for the younger generation to sit through music they consider “old” and “boring”; nor do they have to compromise on a far lower volume than they may choose for themselves.

Similarly, the parents generation have the flexibility to enjoy the conversations they want to have, but also to stand up and dance to music when they feel like it. They’re therefore able to enjoy the celebration all the more, as well as being happy that their children are having the time of their life too.

Finally, for the oldest generation, a silent disco allows them to completely opt out of having to hear unfamiliar modern music at a volume that is uncomfortable for them. Instead, they can enjoy a pleasant evening talking with their friends and catching up with family members. If they do want to take a twirl on the dance floor, a music channel dedicated to their preferences – playing songs that they recognise and love – is ready and waiting for them to enjoy.

Bat/bar mitzvah ceremonies are incredibly significant events religiously. The party that follows this religiously important event is a wonderful chance for a family, and the community as a whole, to come together to celebrate this time in a child’s development.

Choosing a silent disco for a bar/bat mitzvah party truly is the icing on the cake.